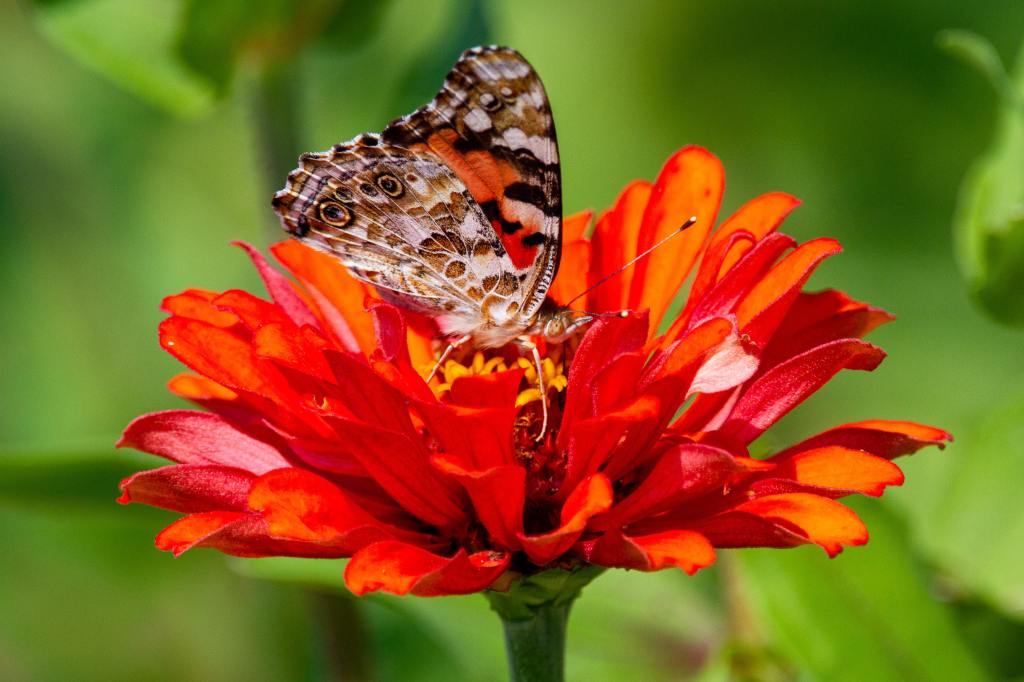 By A. S. Callaghan

On a Saturday in April, my husband brought home two brown butterfly chrysalises in a clear plastic cup, a giveaway from a local Earth Day event. They looked like two tightly shriveled up leaves, hard and impenetrable. The following Monday night, against expectations, one of them hatched, leaving behind a broken chrysalis and a splotch of red goo, the remnants of the caterpillar it had once been. Our older son looked at it, mildly creeped out, and then proceeded to go back to playing Minecraft. Our younger son, more exuberant about the cycle of life, kept yelling, “It’s a baby butterfly!” I took a video, maybe I’d post it on Instagram later.

We put the new arrival – species Vanessa cardui, also known as painted lady – outside under a bamboo bush before I drove my older son to a cub scouts meeting. At the meeting, I googled butterfly just hatched. The article advised waiting a day before releasing a butterfly if it hatched late in the day, since it wouldn’t get enough sunlight to dry its wings before nightfall. Alarmed, I texted the link to my husband, and told him to put the butterfly back in the house.

By the time I came home, David had built a make-shift terrarium out of a clear plastic food storage container. It had holes for air and leaves and orange slices for the butterflies to feed on. It was then that I noticed that one of the wings hadn’t unfolded all the way. I took a bamboo leaf and tried to unfold it, unsuccessfully. The wing looked a little like a cloth napkin that had been forgotten in the dryer, permanently wrinkled. I put some more orange slices into the container and closed the lid.

The next morning, the second butterfly hatched. Its wings were bent to the side, as if someone had blown them dry with a round brush and forgotten to make them symmetrical, like a lopsided Farah Fawcett flip.

Before I woke up the kids, I carried the two butterflies in their terrarium outside into the sunshine. I made a flat cup out of aluminum foil, filled it with sugar water and put more orange slices into the box. I left the lid half open so they could fly away in case a few hours of sunshine fixed everything.

During my lunch break, I was back googling, this time for butterfly wings didn’t fully unfold. I didn’t even have to put in the full phrase, Google already knew what I was going to ask. Scrolling through pages of search results, I discovered that fixing broken butterfly wings is something people actually do, described and discussed by amateur entomologists in the fan forums of websites dedicated to lepidopterology, the study of butterflies and moths.

One video showed how to repair the wings of a monarch butterfly with scissors, rubber cement, and a clothes hanger. A carefully bent and well-positioned wire hanger can be used to press the wings down on a soft surface covered with a towel, the video advised. Rips or tears can then be fixed by cutting a small stint out of cardboard paper and gluing the stint over the tear, finishing with a dash of baby powder, which will dry the glue and ensure that nothing is sticking to the freshly glued surface. If less than 30% of a wing is missing, the other wing can be cut to the same size. Butterflies don’t have nerve endings in their wings so this was akin to getting a haircut, the man in the video explained, and didn’t hurt the insect at all. In the comments section of the video, one woman said she had luck ironing the wings, using an iron on the lowest setting and sheets of wax paper for protection.

I made a mental list. We did have some wire hangers from the dry cleaner. We did have an iron. I did have baking paper, which was probably close enough to wax paper.

Online, in the butterfly forums I had bookmarked, many commenters expressed distress that the animals in their care were injured, concerned they had caused the problem. Maybe they shook the butterfly enclosure and that’s what made the chrysalis drop to the ground. Maybe they used the wrong ratio of sugar water. Was there something that could be done to fix it? Glue the chrysalis back on the branch? Repair torn tissue? Put Humpty Dumpty back together again?

For my part, I felt bad for the two flightless creatures in my care, but I was also mad, mad that I was somehow left with the task of looking after two disabled insects. It hadn’t been my idea to bring them home. They had arrived on my doorstep. And now I was responsible. Responsible to fix it, somehow.

I contemplated ironing butterfly wings. I read the instructions again, tried to visualize it. I had the tools. Finally, a moment of hesitation: Was this madness?

I checked on the butterflies. They seemed calm, content, opening and closing their misshapen wings. They didn’t know what I knew, that these wings were useless. I envied them. After dinner, I broached the subject with my husband in a quiet voice so the boys wouldn’t hear.

“There’s something I have to tell you,” I started. I confessed that I was contemplating wing surgery. As I said it out loud, it occurred to me that this was  ludicrous. But there are times when clinging to a ludicrous scheme is easier than facing reality. The truth was that these misshapen wings were mere specks in the universe of possible misfortunes, a small sample of the infinitive ways things could go wrong which I couldn’t undo, control, or protect us from — a terrifying thought. I tried to bargain my way out of the inevitable, and failed. It was time to declare defeat.

“If I had known that this would upset you, I wouldn’t have brought them home,” David replied, and “It’s nature, it isn’t perfect” and, finally, “Do you want me to take them away?”

There was a house down the street with a tall, purple butterfly bush in the front yard. I told my husband to put our painted ladies underneath the shady bottom branches of the plant, which he did, together with the orange slices.

“And who knows? Maybe the wings straighten themselves out,” he said, afterwards.