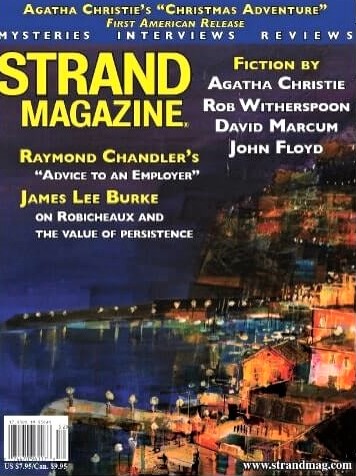 As the writer Chris Willis tells us on The Strand Magazine’s website, “not many magazines can count Queen Victoria and Winston Churchill among their former contributors. However, both contributed to the Strand at different times during its history. It was after all, one of the best and most popular magazines of its time.
For sixty years (1891-1950), The Strand Magazine was a popular source for the best in fiction, featuring the works of some of the greatest authors of the 20th century including Graham Greene, Agatha Christie, Rudyard Kipling, G.K.Chesterton, Leo Tolstoy, Georges Simenon and, of course, Sir Arthur Conan Doyle . . .
. . .Wartime hardships hit the Strand Magazine hard. Paper was rationed, and the size of the magazine had to be decreased. Costs rose, circulation fell, and the magazine never recovered. By 1950, the magazine needed a quarter of a million pounds to put it back on its feet. The owners saw no hope of raising the money, so in March 1950 the Strand was forced to stop publication.
After nearly half a century the Strand has returned. Contributors to this first issue include distinguished crime writers as well as lesser-known authors. With its distinguished tradition behind us, we hope to live up to the high standards set by the original Strand, providing a source for some of the best writing of the twenty-first century.”

The Strand Magazine has been publishing quarterly in the US since 1998. It offers previously unpublished works by literary masters and new short stories as well as articles on craft. On The Strand’s blog there are short fiction, top ten lists, interviews, articles and writing tips.

The Strand is an enjoyable magazine for several reasons–they print new fiction, (YAY!) but they also use articles about mystery, and they have an abiding love of the classics, in mystery fiction and fiction in general. I’m particularly fond of the newly discovered stories they publish by writers not usually thought of as mystery gurus. In all correspondence I’ve had with Managing Editor Andrew Gulli, he has been kind, and polite. He answers it all, from small questions to these questions for the blog.  In September of last year, I had an opportunity to sit down with Andrew Gulli.

Joan: Please tell us a bit about the history of your magazine and about the magazine’s goals present day? Particularly, can you define how your magazine differs from other crime magazines out there?

Andrew: We have been publishing since 1998—I know—where did my life go! And on average we publish 6 stories per issue. We like to keep things inventive, though we do know that readers like the traditional tale with a twist at the tail. I love all the crime fiction magazines out there and to be frank, I think we all end up learning from each other. We try to be more the type that has works that can be literary, at times we’ve published plays, or even articles.

Joan: What are you seeking in general and what especially delights you in a fiction manuscript submission?

Andrew: If I read someone who has read Stanley Ellin, then I know they understand how to construct the perfect short story. When I get jealous of a writer and feel I can never write like they are writing that makes me like I said jealous, but also leads me to email them and publish their work.

Joan:  What is an instant turn-off in a fiction submission?

Joan: How should a writer approach you on a non-fiction submission–review or interview? What do you want to see in a query?

Andrew: If they have something that is very interesting, unique and voice above everything I’ll take notice.

Joan: What are some of your favorite journals/magazines?

Joan: How can writers contact you with questions and find out about submission calls?

Joan: Do you ever consider reprints? (Fiction, non-fiction).

Andrew: Never, ever, never, ever!

Joan: Is there anything else you would like to say to writers who are considering submitting to you?

Andrew: Do your homework, pick up a magazine at the library and read it.

Joan: Is Strand a paying market? Please tell the readers rates and if there are unpaid sections where they can break in?

Andrew: We do pay, but we like to keep how much we pay between us and our authors.

[1] The History of The Strand https://strandmag.com/the-magazine/history/ by Chris Willis